Movies in the Park: The Mitchells vs The Machines 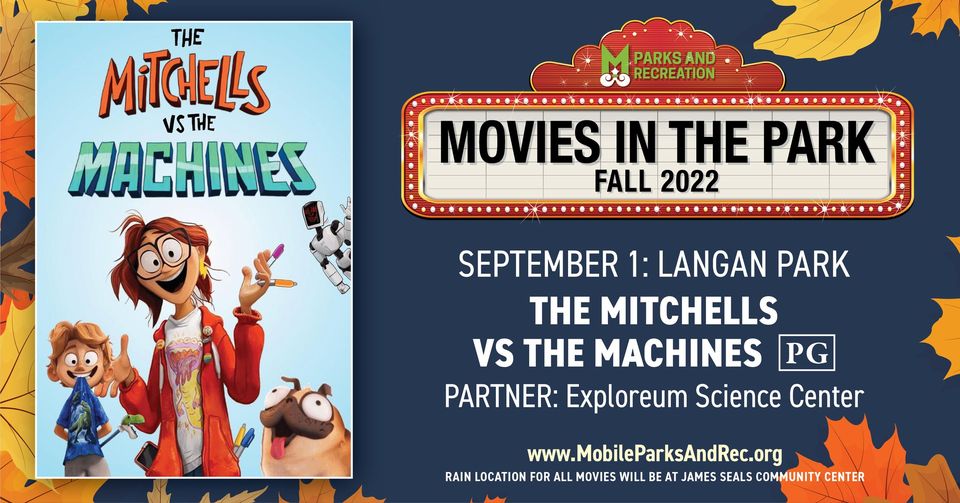 Movies In The Park is a free event that will happen every Thursday in Fall! 8 Movies in 8 Parks! Bring your blankets, chairs and coolers for a Movie Night with Us!

All Events Start at 6PM. Movies Play at Dark.

Movie Title: THE MITCHELLS VS THE MACHINES

Rated PG: A quirky, dysfunctional family’s road trip is upended when they find themselves in the middle of the robot apocalypse and suddenly become humanity’s unlikeliest last hope.

Movie Title: THE WIZARD OF OZ

Rated G: Young Dorothy Gale and her dog are swept away by a tornado from their Kansas farm to the magical Land of Oz, and embark on a quest with three new friends to see the Wizard, who can return her to her home and fulfill the others’ wishes.

Rated PG-13: A look at how tennis superstars Venus and Serena Williams became who they are after the coaching from their father Richard Williams.

Rated PG: After landing the gig of a lifetime, a New York jazz pianist suddenly finds himself trapped in a strange land between Earth and the afterlife.

Rated PG: The prehistoric family the Croods are challenged by a rival family the Bettermans, who claim to be better and more evolved.

Not Rated: When Bodi and his band ‘True Blue’ leave Snow Mountain, to tour with pop sensation, Lil’ Foxy, they learn that fame comes at a price.

Partner: Kids on the Go After School Program

Movie Title: THE PRINCESS AND THE FROG

Rated G: A waitress, desperate to fulfill her dreams as a restaurant owner, is set on a journey to turn a frog prince back into a human being, but she has to face the same problem after she kisses him.